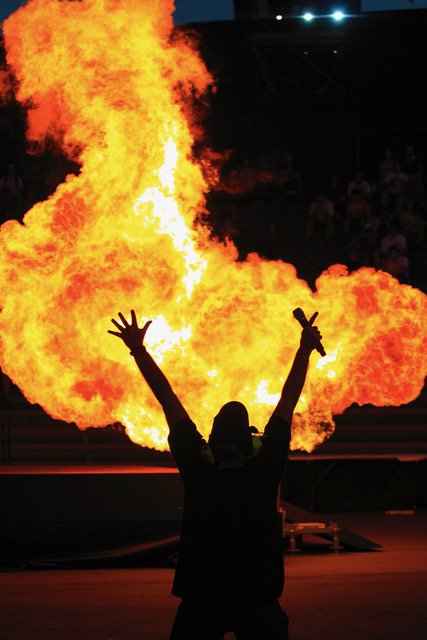 As a voice talent, I perform the craft in the traditional way - the way you’d expect. I record my voice for commercials and promos, plus a whack of corporate narration and other stuff.

You can hear what I mean by listening to my voice over demos: https://www.dougdenance.com/demos/

But I have a secret. A dirty little secret. It took me a while to work up the courage, but I feel I have finally come to the moment where I can share it with you. OK, so here goes…

Get what I mean… dirty little secret. OK, so it’s not really much of a secret. It’s kind of hard to keep it quiet when you’re paid to scream and yell really loud in a really loud environment. And it is loud all right. That’s part of what makes a monster truck show. Bigger and louder than life. After all, leading the category of “motorsports entertainment”, monster truck shows could be easily classified as the pro wrestling matches of motorsports.

Then again, maybe monster truck announcing really isn’t so far removed from voice acting as it might first appear. There is a great deal of acting involved – monster truck announcer is just one of the characters in my repertoire. There’s copy writing… you don’t really think most of what happens at a show is all by chance do you? There’s audio production - both the pre-recorded intros for the various show elements and pre-show promotions and commercials. Oh, the commercials… check one out here: https://www.youtube.com/watch?v=1AUgJUYCw5o&index=5&list=PLKnXV4n7zFKi5OEbkSDTQso8Z0XP8SY3q

As soon as someone knows that I do this – especially when I’m voicing commercials, guess what I’m always asked to say? You got it… “Sunday, Sunday, Sunday” and “We’ll sell you the whole seat, but you’ll only need the edge”.

So, what’s fun? In reality, many of the same things that sometimes aren’t so much fun. Take travel for example. I’ve been fortunate to see a great deal of North America traveling to announce monster truck shows (and various other motorsports entertainment shows such as Freestyle Motocross). I get to fly into the city, then hang around in the hotel hot tub while the guys and gals in the show work on trucks and set up the track, merchandise stands, etc. Then I show up a little while before show time to have some laughs and get caught up. I’ve known many of the production folks, track rats, wrench wenches, the drivers and their crews for so long, it’s like a family reunion in a different city each weekend.

On the other hand, I spend a lot of time alone by myself - in those hotels and sitting in airports. For most of my now grown children’s lives, I’ve been away from home for up to 25 or more weekends a year. I’ve been interrogated by customs officials and held up at borders without work permits and paper work properly supplied by promoters. I’ve had more x-ray scans and invasive searches than many guys in prison.

How about those guys and gals who really are the show? They’re a lot of fun. They have to be. These folks spend hours and hours driving together in semi-trailer trucks and pickup trucks, trailers and motorhomes to get from one show to the next. So, a sense of humor is a must. I always look forward to arriving at the next show so I can hear all the latest jokes (absolutely none of which are appropriate to be written here). And the practical jokes – everything from shaving cream inside a helmet to, well, “adult toys” replacing the shifter knob inside a truck. Like seeing familiar faces at the studio for voice over auditions, I always break into a smile when I arrive at a venue and see these people once again.

But sometimes that heavy travel schedule takes its toll. Being with each other 24/7 can be tough no matter how much fun you have. Plus, the show script calls for stars and supporting roles. Sometimes how you’re cast can get you down (now there’s a parallel with voice over). As the guy who often writes those scripts and determines the roles within them, there can be some tense moments defending those decisions.

The thrill of motorsports is fun – especially when you have the best seat in the house. Lots of noise and speed and stuff getting destroyed – what’s not to like? What’s not so fun is the danger to my friends. While a monster truck show is as controlled an environment as possible, you are still dealing with 10,000 pound trucks flying through the air. The stories you tell later are like the one about the guy a few years who drove so hard during the last show of the season that he literally burned the truck up. Some tranny oil spilled onto a glowing red hot brake rotor and poof - up in flames went a $250,000 truck. The scary part is that methanol fuel burns so hot that the flames are literally clear. The driver slid out of that truck and dropped the 12 feet to the track floor like poop through a goose. Fortunately, his fire suit protected him from injury. We laughed about his crispy eyebrows later. Unfortunately, many others I’ve known have been hurt or even killed over the years.

Like prepping a voice over script, I spend a good chunk of time before the show thinking about the audience. I remind myself that I’m really an audience member with a better view of the action and not a “star’ in the show. I try to remember my children when they were small sitting inside a monster truck wheel rim, grinning from ear to ear. Then I visualize seeing another new little kid having the time of his or her life. The big difference is that later I get to actually see that little kid with the big grin I envisioned reacting to the show.

As I do with voice over, I prepare by thoroughly – for live shows by researching and then studying the notes I make about the show performers. I review the sponsor commercial copy and mark it up. But aside from reading the sponsor ads live, any other written copy isn’t read – it makes up the content of my ad-libs. One never knows when a truck will roll over or when mechanical failure or injury will slow down or stop the show. I have to be ready to enthusiastically, excitedly and intelligently(?) redirect the audience’s attention and fill in the time.

Like much of voice over work, the pay is pretty darn good for how much fun I have. Like with voice over, I had to hustle hard for the work at first and it was hard to break in. The gigs were few and far between for the first 5 years or so. Eventually, consistent performances and - perhaps more important - being professional help bring awards, pay increases and lots of repeat business for many years now.

There is a strong team that makes my performance stronger. There is still a sound engineer who controls the mic levels and effects to enhance what I’m doing on the track and mixes the music and other sound elements to create a complete audio package. There is a show producer who provides directions though the headset down to me running around like a crazy man around the track. Then there are the guys and gals who work the track who I depend on to help to keep me safe and out of harm’s way. They know my concentration is on the audience and not always on the dangers that are part of motorsports even when it’s entertainment.

I’m blessed to have a career where I can continually create in two such disparate paths of the same business. And it took a long time to find a way to tie them both together. But now that my secret’s out, I think my slogan does a pretty good job: “When he speaks, it’s an event®”.